Mattathias and the Maccabees

Chanukah originated over 150 years before Yeshua was born. The Hebrew people had fallen to hard times; a clear warning that their relationship with God was not well (see Deut 28). Israel’s enemies to the north attacked and took control of the Hebrew state. The invaders made it illegal to worship the one true and living God. If anyone was found studying or even obeying the Torah, he would be executed. Many people were even forced to worship idols. When the evil soldiers came to the town of the Hasmoneans, now known as the Maccabees (“Hammer”), to force this idolatry on the people the town’s patriarch, Mattathias (Matityahu in Hebrew), refused to offer sacrifice to the false god. There was a volunteer from the crowd however, who worked his way forward to offer sacrifice. In holy indignation Mattathias killed him. 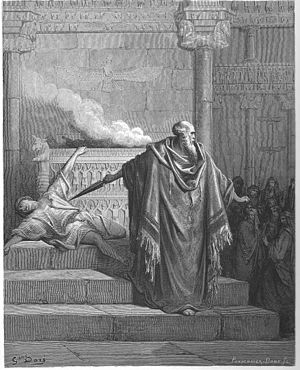 Mattathias and his sons then killed the soldiers and fled to the mountains. From there they gathered together a brave company of men who decided it was time to reclaim their heritage and land. The Maccabees realized that it was the sins of the nation of Israel that resulted
in their conquest: so they earnestly sought God in repentant prayer. They sought HaShem and HaShem heard them.

Though they were terribly outnumbered, they chose to fight. Backed by their faith in the Covenant God of Israel who had promised through Moses that: “…five of you shall chase a hundred, and a hundred of you shall put ten thousand to flight; and your enemies shall fall before you by the sword.” They fought and they won just as God said they would. The small Judean army was victorious in battle after battle. They even retook the beautiful Holy Temple. While they are not canonized scripture it is nonetheless beneficial to read the historical books of 1 and 2 Maccabees for the details.

A model of the second Jewish Temple in the Israel Museum in Jerusalem (Photo credit: Wikipedia)

Because they rededicated the Jerusalem Temple and returned to the Torah in the winter and due to the fact that up until this time they were unable to celebrate the Holy Days, they then returned to the last Holy Day they missed which was the eight-day festival of Sukkot. (Feast of Tabernacles, see Leviticus 23). This holy time is all about the Messiah dwelling with His people in the coming future. Even today generation after generation of Torah-believing people light miniature menorahs (chanukiahs) on Chanukah to celebrate and remember HaShem’s gift of deliverance. Chanukah honors two types of salvation: physical deliverance from oppressors and the spiritual deliverance from sin.

It should be noted that the Temple was the most sacred place in the Hebrew world. It was at the Temple where HaShem promised to meet with the people and fellowship with them. Each and every day Bible-believing people would sacrifice offerings and draw close to HaShem at the Temple.

Chanukah and the Messiah 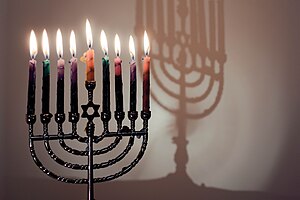 About 150 years later the Hebrew people were again under foreign domination, but this time to Rome. Israel had again fallen into a spiritual malaise. They cried out for God to send them the promised deliverer, the Messiah. Many of the Judeans, (some of the progeny of the Maccabees) believed that a humble stonemason named Yeshua might very well be the Messiah. They tried to make Him King but He refused. It wasn’t until after His execution and resurrection that His followers realized the He did provide deliverance. It is important to note while the history of Chanukah is given outside of scripture it was predicted by the Prophet Daniel and the celebration is confirmed by Yeshua Himself in John 10.

He didn’t provide the Maccabeean style of deliverance from Rome they had hoped for, but deliverance from an even more evil and powerful enemy, sin. In addition, Yeshua promised to return one day to deliver His people from their mortal enemies as well.  We eagerly await that promised return.